Get My Business Architect Score

Have you ever wondered why startup companies stop growing? Sometimes they run out of potential customers to sell to or their product starts losing market share to a competitor, but there is often a more fundamental reason: the founder(s) lose the stomach for it.

When you start a business, the assets you have outside of your business likely exceed those you have in it, because in the early days, your business is worthless. As your company grows, it starts to have value and becomes a more significant part of your wealth—especially if you’re pouring your profits back into funding your growth.

For most business owners, their business is their largest asset.

Eventually, your business may become such a large proportion of your wealth that you realize you are taking a giant risk every day that you decide to hold on to it just a little bit longer.  Learn how you can create a valuable business that can thrive without you and lower your risk level!

95% Of His Wealth In One Business 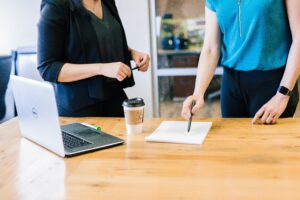 In 2000, Etienne Borgeat and Olivier Letard co-founded PCO innovation, an IT consulting firm. The company took off and, by 2016, PCO had 600 full-time employees and offices around the world.

As the business grew, Borgeat and Letard started to become uneasy about how much of their wealth was tied up in their business. By 2015, the shares Borgeat held in PCO represented 95% of his wealth.

That’s about the point that aerospace giant Boeing came calling. Boeing wanted PCO to take on a very large project and Borgeat and Letard turned down the opportunity reasoning that the project was so large it could risk their entire company if it went wrong.  In the early days, the partners would never have turned down a chance to work with Boeing, but the partners had changed.

That’s when Borgeat and Letard realized the time had come to sell the valuable business they created. They agreed to an acquisition offer from Accenture of over one times revenue.

The success of your startup is probably driven by your willingness to put all your eggs in one basket. You’re all in. However, at some point, you may find yourself starting to play it safe, which is about the time your business may be better off in someone else’s hands.

Learn more about creating a valuable business that thrives without you.